The best perennials for sandy soil are the ones that like good drainage and low soil fertility.

At the garden centre or nursery, plants labelled as suitable for poor or light, well drained soils are the ones to choose and will require very little input from you, the gardener.

However, if you are prepared to carry out a little initial soil preparation by adding lots of well rotted organic material, such as good garden compost, at planting time, and giving an organic mulch each spring, you can extend the range of plants very considerably.

The addition of generous amounts of organic matter allows you to achieve that apparent contradiction- the moist but well-drained soil!

Most of the perennials I've chosen fall into the first category. They are good doers and often pretty drought resistant into the bargain.

Even better, they can be easily combined to create beautiful and effective planting schemes.

Oh, and I almost forgot... most of them are absolute magnets for bees, butterflies and other wildlife

My Favourite Perennials for Sandy Soil 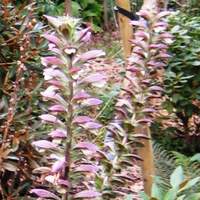 Use it to add a focal point to a border either in full sun or light to dappled shade.

This plant does like to spread so be prepared to give it some room. In hot dry spells it can be prone to mildew so it is worth watering it during these times and giving it a compost mulch. 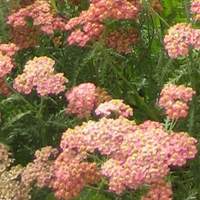 Reasons to grow: At their happiest in poor, free-draining, sandy soils, Yarrows flower through the summer and often into autumn providing a magnet for bees and butterflies.

The flat plates of tiny flowers are held aloft over silvery green, feathery, fern-like foliage and appear as delightful smudges of colour in the border.

They contrast well with more upright plants such as Salvias and Eryngiums (see below).

The flowers of 'Belle Epoque' start off pinkish red and fade to a pale yellowish beige as they age. They can be removed to encourage further flushes.

If you leave the plant standing through winter, the spent flowerheads provide structure and look fabulous rimed with frost.

Also consider: A. filipendulina 'Gold Plate' for a taller plant (1.2-1.5m, 4-5 ft) with yellow flowers. For orange or terracotta flowers try  A. 'Walther Funke' or A. 'Terracotta'; for red flowers A. 'Summerwine' or A. 'Red Velvet'; and for pink flowers try A. 'Heidi' or A. 'Lansdorferglut'. 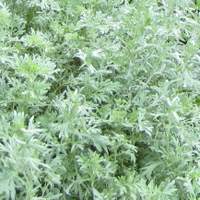 Reasons to grow: For its foliage! The mound of finely cut, aromatic, silvery leaves forms a perfect foil for other plants such as Perovskia 'Blue Spire' and Eryngiums (see below).

Artemisia also looks good threaded through with the flowers of the deeper coloured hardy geraniums.

Its own yellowish flowers are produced in summer but are small and not particularly attractive so you may want to pick them off.

Wormwood was used in the production of the (now banned) drink Absinthe which seems to have played such a great part in the lives of Parisian artists in the Nineteenth century. As Artemisia is poisonous, I don't recommend you try to recreate it!

Also consider:  A. Schmidtiana 'Nana' which is only 8-10cm (3-4in) high and can be used to produce a low, silvery carpet in front of Lavenders, Salvias and Dianthus.

For a taller plant try A. Ludoviciana which grows to around 1.2m (4ft) and looks good contrasted with dark foliage. 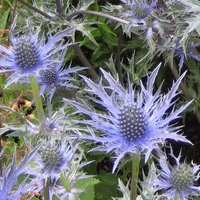 Reasons to grow: This delightful rather thistle like perennial for sandy soil wins on many counts.

If you don't cut them down at the end of the season, the dead flowerheads remain standing well into winter.

It combines well with purple foliage, (try Berberis thunbergii 'Purpurea') and silver leaved plants such as Artemisia and Lavender. It also mixes well with the flat flowerheads of Achillea.

For a coastal garden E. maritimum, the true Sea Holly, is hard to beat. It will tolerate salt winds and has grey green, rather glaucous, foliage and flowers. 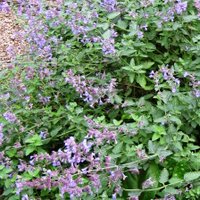 Reasons to grow: Don't dismiss this plant just because it's so common. It's easy to grow and has a long flowering season. The grey green foliage is aromatic (cat's love it!) and it produces spikes of soft lavender flowers from June to September.

It looks great as an informal edging to gravel paths and is a magnet to bees.

If you cut the whole plant down to within a few centimeters of the ground once the flowers start to go over, it will produce a second flush of blooms.

Also consider: N. x faassenii 'Snowflake' for white flowers or, for a larger plant,  N. 'Six Hills Giant' which grows to 75cm (30in) or more. 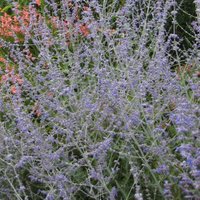 Reasons to grow: Yet another perennial that grows in sandy soil with a long season of interest.

The stems are white and upright, the fine, deeply cut, foliage is greyish green and aromatic, and the generous spikes of violet blue flowers last from late summer through autumn.

The whole plant has an ethereal, transparent quality and it combines well with the other plants on this page.

Leave it standing through winter to appreciate the the beauty of the stems and branches, especially when they are dusted with frost.

Also consider: P. 'Little Spire' is slightly shorter standing at around 1m (39in) and is useful if space is limited. 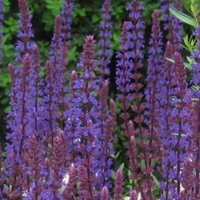 Reasons to grow: This plant has been one of the stars of my garden for the last couple of years. The tidy greyish green foliage is aromatic and contrasts with the upright stems which are dark purple, almost black. From June to October the flower spikes appear and the colour takes your breath away. It's a rich violet purple with an almost electric quality - it positively glows.

It looks great paired with hot pinks (I grow it next to a deep pink peony) or with contrasting yellows such as one of the golden Achilleas or Rudbeckias. It can be teamed with silver leafed plants such as the Artemisia (above).

Its upright habit also means it combines well with looser, more rounded plants like the hardy geraniums and Astrantias.

Its also attractive to bees and butterflies.

Also consider: S. nemorosa 'Amethyst' for more lilac blooms, 'Ostfriesland' for violet blue flowers, or one of the rose pink varieties such as 'Sensation Rose'. 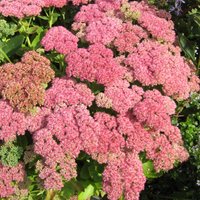 Reasons to grow: This generous plant has something to offer through much of the year and is irresistible to butterflies and bees.

In spring the fleshy, slightly glaucous, leaves emerge from the ground, followed in late summer and early autumn by large flattish heads of tiny star like flowers. The flower buds start off green then turn from light to dark pink, then red and finally fade through brick red to brown.

At the end of the season leave them standing to lend form and substance to your winter garden.

For groundcover try the varieties of Sedum kamtschaticum which typically reach a height of 10cm (4in) and produce yellow flowers. 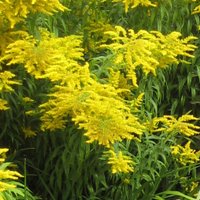 Reasons to grow: The older varieties of Goldenrod were rather unruly and apt to take over the border. However the newer varieties are a great improvement.

'Goldenmosa' has stiff upright stems and long, rather yellowish, green leaves. The yellow flowers are reminiscent of Mimosa and are carried on long feathery panicles (up to 30cm/12in) in late summer and autumn.

it is a cheering sight towards the end of the season providing a shot of bright colour which contrasts beautifully with the lavender blue flowers of Perovskia 'Blue Spire' (above).

Also consider: For a larger plant try S. 'Fireworks' which grows to around 1.5m (5ft) or for something smaller try S. 'Crown of Rays' which reaches only 60cm (24in).

More good plants that grow in sand can be found at climbers for sandy soil.

If you're not looking for plants that grow in sandy soil at all, head over to plant guides for links to all the 'plants for places' pages on this site.

You can find information and advice about garden soil, including links to other soil-related pages, at garden soil.