Choosing shade tolerant trees allows you to achieve a fully rounded garden design even in the shadiest, most apparently inhospitable conditions.

But why plant trees at all in a shady garden - surely they only add to the existing shade problems?

Strange as it may seem, they don't.

Instead, shade tolerant trees distract the eye from surrounding high walls and buildings and lend essential height, fullness and structure to your design.

Without trees, a shady garden can appear bleak and forbidding.

For year round interest you will definitely need a few shade tolerant evergreen trees.

Their foliage will brighten up even the dullest winter months and their often strong shapes act as focal points in your design.

They can be combined with deciduous shade tolerant trees to give a changing landscape through the seasons.

The following list of evergreen shade tolerant trees is not meant to be exhaustive but will give you some ideas of the range of evergreen trees that you can plant in a shady space.

Evergreen conifers are particularly good for adding year round greenery and texture, and many can be clipped either to create formal shapes or to keep them within bounds even in the smallest of gardens.

Once planted, they generally require little attention and are a good choice if you want a low maintenance garden.

As a rule of thumb, shade tolerant species include most Abies (Fir), Taxus (Yew), Thuja (Arborvitae) and Tsuga (Hemlock).

Do not choose Cedrus (Cedar) and Juniperus (Juniper) for the shady garden as they usually require good levels of light. 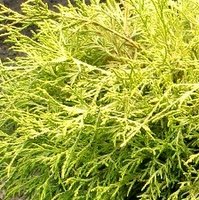 Reasons to grow: A hard working conifer that gives value for money throughout the year. The thin thread-like hanging foliage is bright yellow in summer, deepening to rich gold in winter, and looks good planted in front of dark green evergreens. Young plants can be clipped in late spring to keep them in shape. 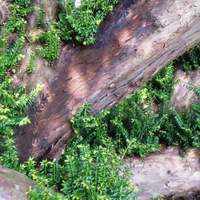 Reasons to grow: This evergreen conifer is one of the most useful trees you can grow in a shady garden. Its dark green feathery foliage provides the perfect foil for other plants and it can be clipped and trimmed to form hedges and topiary shapes.

Yews are slow growing but the growth rate can be increased by watering well in the early years. 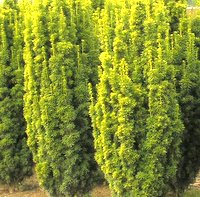 Reasons to grow: Yes, I know it's another yew but they are such good shade tolerant trees that it's worth including another, particularly as it has a different form and colour to the Common Yew.

The Irish Yew is an easy to grow, low maintenance evergreen that has a dense, upright form, and this one looks especially good all year round with its golden yellow foliage.

Its neat columnar habit and slow growth rate make it an invaluable specimen plant in even the smallest of gardens. In late summer it produces bright red berry-like fruits which contrast well with the foliage. 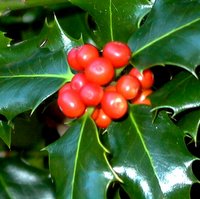 Reasons to grow: An invaluable, many branched, evergreen tree or shrub with glossy leaves. Female trees produce berries, ranging in colour from golden yellow, through red, to near black, in autumn.

Hundreds of cultivars are available so there should be one to suit every garden - it's just a matter of choosing the right one!

In general, the variegated forms do best with higher levels of light so these are not suitable for a very shaded spot.

If you want berries (and Christmas just wouldn't be the same without swags of holly) you will need to plant both a male and a female holly, unless you choose a cultivar such as 'J. C. van Tol' or 'Pyramidalis' which do not require cross fertilization to produce fruits.

If in doubt about the sex of a particular cultivar, ask for advice from your nursery or plant supplier. Do not rely on the name alone - after all, who would guess that the cultivar 'Silver Queen' is male? 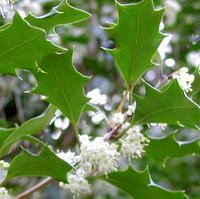 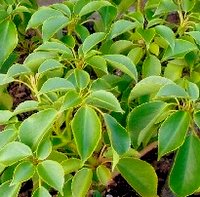 Reasons to grow: Although not fully hardy, this slow-growing tree is tougher than it looks and is an excellent evergreen for a sheltered position.

Attractive leathery green leaves are arranged in neat spirals at the ends of spreading branches, and unusual, petal-less green flowers are borne in spring. Each flower has numerous stamens that radiate outwards like the spokes of a wheel - hence the name.

The whole plant has a rather primitive look and makes an interesting architectural garden feature.

Perennials and ferns for partial shade.

Perennials and ferns for deep shade.

Perennials and ferns for dry shade.

Gardening in the shade gives an overview of the subject and an explanation of how to identify the different degrees of shade.

Links to other 'plants for places' pages can be found at plant guides.