When Is The Best Time To Divide Perennials? 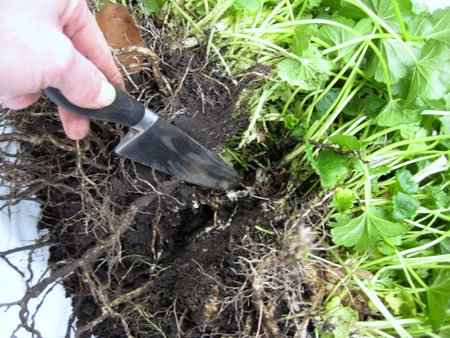 You usually need to divide perennials every two to five years to keep them in good condition.

After this time you may notice that your clump forming perennials have become less vigorous and flower less profusely as the clump becomes congested.

One sure sign of this is the 'doughnut' effect where the plant dies off in the middle leaving a ring of more vigorous growth at the edges. This is the signal that it is time to rejuvenate your plants by dividing them.

Of course, you don't have to wait this long. You may find that you need to divide your perennials sooner if they have outgrown their site and are crowding, or being crowded by, neighbouring plants.

Very tightly packed plants are more prone to disease due to poor air circulation, so either divide the whole plant or simply remove pieces from the edge to make more room.

But you don't even have to wait for your plants to reach this stage before you divide perennials because, quite apart from reinvigorating your plants, division is also a great way to increase your stock of plants... without spending money!

So if you have a new border to fill, or have gaps in an existing border, start dividing. If you end up with more plants than you need, swap with friends and neighbours to increase your range of plants.

When is the best time of year to divide perennials?

If you were to ask five gardeners from different regions this question you would be unlikely to get the same answer twice. So how on earth are you supposed to know who is right?

This is definitely one of those questions that causes confusion and perpetuates the myth that dividing perennials is a complicated and difficult procedure.

It isn't, so read on and take heart!

The traditional time to divide perennials

The usual advice is divide perennials between late autumn or fall and early spring when they are (more or less) dormant. However, this is not a hard and fast rule and there are some problems with late autumn division, especially in colder, wetter regions.

It is definitely not a good idea to divide at this time if you have a heavy clay-based soil, partly because your new divisions will have to struggle through the winter in cold waterlogged conditions, and partly because you are likely to compact these types of soil if you walk on them in wet autumn weather.

Divisions made in late autumn are also prone to frost heave whereby they are literally forced out of the ground during frosty spells - not a good start in life!

On the other hand, if you live in a hotter southern climate, late fall can be the very best time to divide as the newly planted divisions will really appreciate the milder autumn conditions and will start to develop healthy root systems giving them a head start the following spring.

Dividing perennials according to flowering time

A more useful approach is to separate your plants into early and late flowerers. Divide those that flower between early spring and early summer, say to the middle of June, in early autumn or fall, and divide the later flowerers in spring.

This is a helpful rule of thumb, but don't worry; if you didn't get round to dividing in autumn you can still do it the following spring. In fact, most ornamental grasses prefer to be divided in spring.

The secret of spring division is to wait until the new shoots are emerging and there is 5 to 10cm (2 to 4in) of new growth. At this point the plant is primed for growth and the new divisions should establish easily. Waiting until this point also allows you to see at a glance which are the healthiest parts of the plant and which should be discarded.

If you have spring flowering perennials enjoy the display and then divide as soon as they have finished flowering.

Don't be afraid to flout the rules!

Suppose you don't manage to divide in spring, will you have to wait for another year? Well, not necessarily, as any experienced gardener will tell you.

Think of it like this... if you have a perennial plant that is thriving in your garden, you can take it as read that it just loves the growing conditions and that it will continue to do what happy plants do best: grow. It will take a lot to finish it off completely and you can move it at almost any time, even in the growing season, and even when it is actually flowering.

If you do this, just remember to trim the top growth down to around 10cm (4in) before replanting, otherwise the roots are going to have to work extra hard, and keep the new plants well watered.

It will be obvious by now that there is no universally correct answer to the question of when best to divide your perennials. Use the early autumn/spring rule of thumb as a guide but don't be afraid to vary it if you need to.

If you feel nervous about trying division at any other times you can experiment by leaving the parent plant in situ and removing and replanting sections from the outer margins. You will probably be pleasantly surprised by your success rate!

You will find an illustrated step-by-step guide to dividing perennials at How to Divide Perennials Successfully.